The 800-pound SEO Gorilla in the Room

I’m about to stir one hodgepodge of a pot with this one and I want to make my intentions clear and simple.

I’m setting the bar in the digital world of website development to a much higher standard.

I’ll get to that shortly. But the reason is simple. Progression.
‍
If we as digital producers and marketers are to set our sights on optimization relative to all things web pages, then I’m going to be that 800-pound gorilla in the room that flaunt’s his interweb muscle.

The reason being, because it’s a natural human trait to want to exhibit one’s abilities and because what is optimization if you don’t have something to compare to?

The short answer, nothing.
‍
But I have to warn those taking my heed that what I am about to share has been the progression of many tribulations, long nights, loads of caffeine and the onset of male pattern baldness, to which the latter, I have grown a liking and contentment for.
‍
Now before I get into the declaration I am about to unwind on, it may be of note to preface with events leading up to my supposed supposition.

Straight out of college with no experience I went down the deep rabbit hole in wanting to become an entrepreneur.

This was before instagram, and so there were no @garyvee’s to look up to when I endeavored to start my own business. With whatever I had memorized in school and regurgitated in order to graduate with my BBA in Marketing, I decided I wanted to get into supplements and thinking I was a marketing genius even though I hadn’t at that time worked on any real projects outside of school, I used my knowledge of what I had learned about the BCG matrix and the 4 P’s and proceeded on my way to whichever direction I figured was right.

But, a brand it wasn’t because no one knew about it.

I put in countless hours envisioning this grandiose water that I wanted to create that was like no other water on the market.

And extraordinary it was, from what was actually in the water, the design of the bottle, the 100% recycled plastic that the bottle was made from to which I coined beginAGAIN, the idea of a good cause behind it, I called it Drink to Water and I was in touch with Matt Damon’s charity water.org where I was going to donate 10% of profits to helping people get access to clean water (I was really inspired by Tom’s shoes at this time and I wanted to do something similar) and not to forget, every one that had tried the water really liked it.

For those that are interested to see what I came up with, here’s an image of the homepage that I pulled from Wayback Machine. 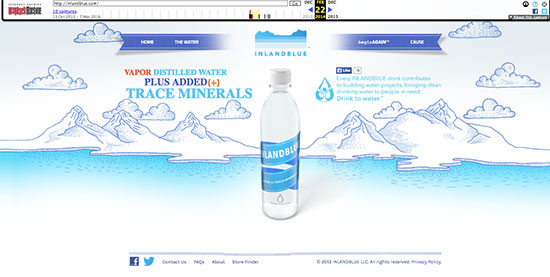 Bottom line, this was my first baby and I really cared for it and wanted for it to spring to life.

Within my first month or so of launching I had no more money I could borrow and I was working as a valet throughout this time at night and all weekend while I was running into Manhattan during the mornings on the weekdays and making my rounds from store to store.
‍
I managed to get into 50+ stores within my first two weeks and even though this was a great start, there were all sorts of problems along the way, what today I like to refer to as one venus fly trap after another.

Now at this point I had begun using Photoshop and Illustrator because the designer that I took on from behance who had a huge following and had really nice designs in his portfolio, I thought would create the best branding for my company, but didn’t, and so I ended up having to learn how to use Adobe to contribute to his commissions, not drawing up illustrations or anything far-fetched, but little things, like changing sizes, fonts, text and so forth to alter the aesthetic of the work that he was presenting me that I wasn’t satisfied with.

For whatever reason I convinced myself that I would be able to make him deliver and so I kept him on board with the project and finally with my creative direction we came up with something really cool and unique.
‍
That was just the beginning.

I had now gotten a taste of experiencing my own creative direction in branding and marketing. I enjoyed taking an idea from thought and making it into a reality, basically the whole design process intrigued me and I took a liking to stimulating my creative juices.

In the midst of these ongoings I came to hear about Kickstarter just at the time when people were just catching wind of it and good projects just started popping up one after another.
‍
My friend at the time had just graduated from the same college just a semester later with a degree in Entrepreneurship but he had no idea what he wanted to do. I hadn’t seen him for some time and so we met up in Manhattan during the winter months and went to the sauna after which we grabbed some food.

As we were sitting and eating, I noticed the wool knitted zip up he was wearing and complimented him on it.

He said thanks and told me his mother from back home had knitted it for him.

A few minutes later I find out his sister works for a similar clothing brand like the Armani Exchange we have in the United States but in his country.

Next thing you know I’m telling him about kickstarter and we come up with a name for a clothing brand for him to get things going.
‍
Every few weeks after that I would check up on him and see how his progress with his new found endeavor were coming along and it seemed that things weren't really moving along.

I kept eyeing projects on kickstarter all through this time and was keeping tabs on successful projects. This was also when HBO was playing the show “How to Make It In America” based on two young guys hustling in NYC who ended up buying Japanese denim fabric off the back of a truck and started a clothing line.
‍
At this point I either needed to get investors for my water company or I had to quickly shift gears. The show put a spell on me and I realized with kickstarter and the potential profits I could make off of one clothing garment as compared to one case of bottled water, I could actually make it in America.

I called up my friend and told him we’re doing this together to which he couldn’t object and a few months down the line we did our first successful kickstarter campaign.

Again, I had this incredible product, this time a t-shirt made from superfine merino wool, a spot on idea for the brand but everything else was terrible from the execution of the kickstarter video, the photo shoots we did, just everything didn’t pan out the way I had envisioned with the shoe string budget we were working with which was our pay checks week to week, except for the beautiful logo that we created and I had designed, that I still cherish.

We were so desperate at one point that we both drove two plus hours to the Cool Material headquarters unannounced and I was able to pull off a pitch to have the site owner write about us, which was super clutch.
‍
It’s really hard to do things when money and resources are scarce and the people you take for hire under deliver by a long shot. Suffice it to say at this point I still didn’t know much about nothing but I learned a lot real quick from the hard knocks that we took and all the work that I was picking up along the way from designing, making websites, doing photo shoots, editing, you name it, I was doing it.
‍
However, being partners we had our differences and eventually it didn’t last.

I started making websites after that as a freelancer, however, I was still experimenting and didn’t know much about all the different website builders out there but I’ve tried them all since then and currently use webflow.
‍
Since then I have gone on to do a number of ventures to which my last one has brought me to SEO.
‍
Ever since stumbling across SEO, learning the fundamentals and getting a grip on my content marketing and writing skills, with the knack that I have developed over time in designing and making websites, I am truly the 800-pound gorilla.

And so it took me some paragraphs to get to the crux of my pronouncement.

To take the online user experience to the next level, the branding, designing, website development, content writing and search engine optimization will have to be uniformly directed and dictated from one dome without the ubiquitousness of the compartmentalization that exists in the digital marketing industry today.
‍
I stand firmly on high ground.

How Can We Help Your Marketing?